Columbia is an Ivy League university with a traditional residential campus based in New York City. Columbia College and The Fu Foundation School of Engineering and Applied Science offer over 100 areas of study—more than 80 through Columbia College, the traditional undergraduate liberal arts college, and 16 through Columbia Engineering. All students enroll in Columbia’s Core Curriculum, one of the nation’s oldest and most renowned Core programs, consisting of courses that not only expose students to a variety of perspectives and fields, but also prepare them for any career they pursue.

Students at Columbia have unparalleled access to all that the university and New York City have to offer.  Discover a new interest by joining one or more of Columbia’s  500+ student groups and clubs, or get involved with one of the school’s 31 NCAA Division I athletic teams. Take advantage of research opportunities from among 200 research institutes and centers.  See the sights and explore the art scene with your Columbia student ID, which grants you free admission to 27 museums throughout New York City.

A few notable facts about Columbia: 84 Nobel Prize winners are Columbia alumni, faculty or former faculty; more than 40 Columbians have competed in the Olympics; the FM radio was invented in a lab on campus; Columbia’s alumni include 5 Founding Fathers, 9 Supreme Court Justices and 34 Presidents and Prime Ministers, including former President Barack Obama, ’83CC; more than 100 Pulitzer Prize winners are Columbia alumni.

Fun Fact: Columbia undergraduates come from all fifty states and more than 100 countries.

Take a virtual tour or attend a virtual information session

3.9% applicants admitted
Over 95% in top decile of high school class

Total exceeds 100% because students may indicate
more than one race/ethnicity. 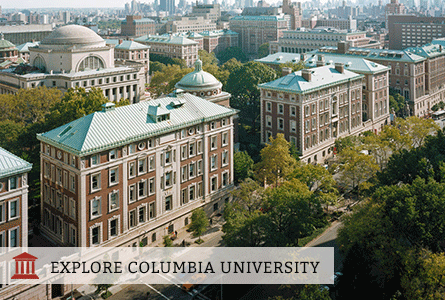