Oberlin College would like to make the following acknowlegement: Oberlin College is located on the native Homelands of the Erie and Potawatomi people which is  now known as Oberlin, Ohio. Although we mark the founding of Oberlin in 1833, this region’s history goes much further than that. The only way we can in good conscience celebrate Oberlin’s values is to first acknowledge the indigenous peoples whose stories and role in our land’s history have long been ignored. While this single gesture is not enough, we use this as a step towards bringing visibility and increasing engagement with all of the histories and communities that have led us to the Oberlin community we cherish today.

Oberlin’s learning environment is like no other, combining a top-ranked liberal arts college, a prestigious music conservatory, and one of the finest academic art museums in the country – on a single campus. Oberlin has been a longtime leader in educating undergraduate scientists, and since 1920, more Oberlin graduates have earned PhDs than the graduates of any other primarily baccalaureate college in America.

Learning happens both inside and outside of the classroom at Oberlin. Through the four-week Winter Term in January, students devise and pursue on and off-campus programs of independent study or research, and undertake – individually or with a group – projects outside the structured curriculum. Oberlin’s Career Community Program encourages all third-year and fourth year students to participate in a guaranteed paid-internship in order to gain skills and experience relevant to their career interests, along with Winter Term credit and an experiential opportunity. Oberlin’s Creativity and Leadership Project and its LaunchU program provides students the opportunity to participate in workshops and receive mentorship that will help develop skills essential to planning and launching a business venture.

On average 75% of students study abroad at some point during their Oberlin experience, which has led the college to be ranked fifth in the top 25 baccalaureate institutions in the nation for total number of study-abroad students. Oberlin hosts an extraordinary lineup of speakers and performers throughout the year, and students produce hundreds of their own recitals, theater and dance performances, art exhibitions, and more.

At Oberlin, you’ll find that you truly have the power to make a difference. An emphasis on risk-taking and innovation pervades the college and the conservatory, inside and outside the classroom. Oberlin's 2,900 students are engaged, determined, intellectual, creative, and embrace the idea that one person can change the world.

Fun Fact: Oberlin was the last Ohio based football team to beat Ohio State, and John Heisman (who the Heisman Award is named after) was their first football coach!

94% of students are from outside of Ohio 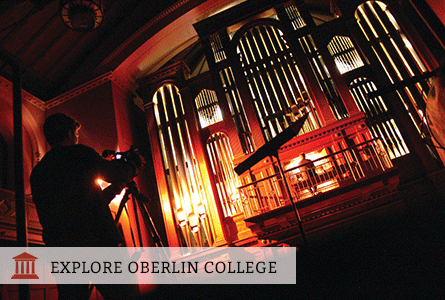