Students come to Williams from around the world for reasons as different and varied as their backgrounds, but they start with a few things in common. They want to study with some of the world’s leading professors—luminaries as eager to teach and mentor as they are to conduct research or create. They’re after the eclectic campus life and beautiful, natural surroundings of western Massachusetts. Remarkable freedom and resources are at their disposal so they may explore widely and deeply and grow as an individual and as a citizen of a global society. The Williams tutorial, modeled after the Oxford Tutorial system, pairs two students with a faculty member in deep inquiry of a single topic over an entire semester. Many students further engage with Williams faculty over the summer, when they work on campus as fully paid research fellows in the humanities, natural and mathematical sciences, and social sciences.

At Williams, all first-years live together in a thoughtfully constructed microcosm of the Williams community known as an Entry. The majority of students are involved in at least one extracurricular activity, either by participating in service, playing for one of Williams’ Division III athletic teams, or showcasing their creative energy through music, dance, or theater groups.

All of this is done in a setting that's encouraging, not cutthroat, for it's an atmosphere of generosity that best nurtures the pursuit of excellence.

Fun Fact: Our unofficial and beloved mascot is a purple cow named Ephelia. 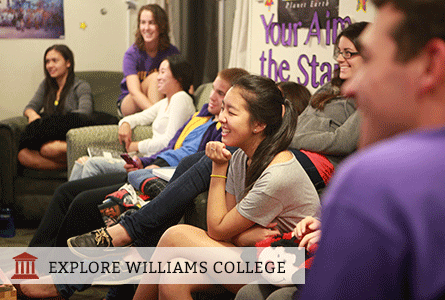